MeggieSoft Games Euchre & Ecarte is a comprehensive implementation of two popular Card Games: Ecarte and Euchre (the two-player version). Play against an online opponent or against your computer. Euchre & Ecarte has a rich user interface and many customizable graphic, sound (including MIDI music and speech output), rule and scoring options. Six different computer opponent skill levels are available for when you are unable to get online, or just want to practice privately. Both games involve winning the majority of five tricks. In Ecarte, each player is able to Swap unwanted cards with fresh ones from the stock before playing the tricks. In Euchre, no exchange is permitted, but the players negotiate which suit will be the trump suit. Points are won for winning the most tricks, winning all five tricks, and (in Euchre) beating the player who chose the trump suit. MeggieSoft Games Euchre & Ecarte also permits the adventurous player to combine rules from each game - thus creating a "Eucharte" hybrid. The user interface, common to all MeggieSoft Games, supports both point-and-click and drag-and-drop mouse operations. Features include: realistic animated card movement; right-click pop-up menus; a hint facility; a tutorial; automatic play; automatic save and restore of partly finished games; multiple-user scoreboards; a clean and uncluttered main window; status-bar shortcut buttons; and fully customizable main display font and wallpaper effects for the table and playing mat, and the card backs.
​ 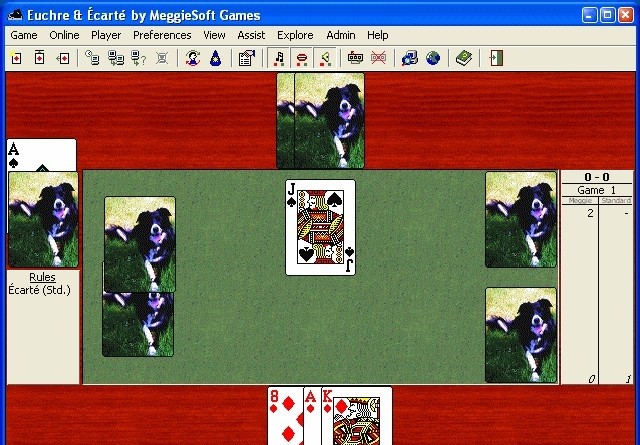