combines the action of first-person space combat with the drama and intrigue of a classic air combat movie. Countries from around the world including the United States, China, Russia, and Great Britain have formed strategic alliances and now battle for control of EARTH, Mars and other planets across the solar system. As part of a newly formed, ragtag aviation unit, the 45th Volunteers Squadron, your goal is to rise within the ranks, from a lowly first lieutenant to a wing commander that calls the shots, while defeating the Coalition and earn the respect of your peers.StarLancer provides a level of graphic detail and effects not currently found in space combat games with particle effects, dramatic source lighting, and realistic ship destruction. There are more than 80 types of spacecraft rendered in extraordinary 3D detail throughout the dynamic mission structure. You`ll fly in over 25 gripping missions that range from escorting marine boarding ships to freeing POWs to leading an assault on space stations built right into an Asteroid Field. You can choose from more than a dozen ships and arm them with more than 20 weapons, including nova cannons, pulse lasers, collapser guns, and jackhammer missiles.You can work cooperatively through the entire campaign with up to 4 other players or Dogfight in 6 different deathmatch modes with up to 8 players over the Internet. Whether you are engaged in a dogfight with swarming enemies or escorting a Torpedo run on a massive capital ship, the StarLancer 3D engine provides unparalleled fluidity in gameplay with balanced, consistent frame rates. Rather than the standard environment in current space combat games with space being fairly empty beyond the enemy fighters, the universe in StarLancer feels alive and interesting for you to participate in. Neutral craft can even be seen going about their business by performing functions such as unloading freighters or escorting convoys.
​ 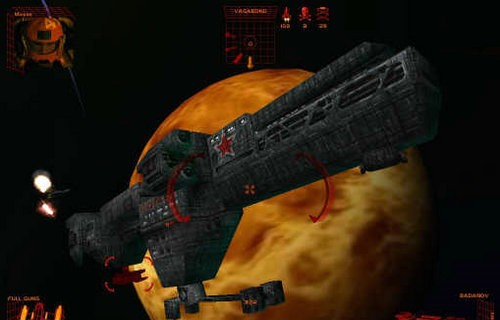