Metal Fatigue is a real-time strategy game that follows the story of three brothers caught up on opposite sides of a WAR over the riches of a long-dead alien civilization. Set in a fully 3D world with multiple camera angles, Metal Fatigue stands apart from the genre with its numerous innovations: giant, reconfigurable Combots; three-level play; artificial intelligence from award-winning game designer, Mark Baldwin; and a prebuild phase that gives the player enough time to establish a base before being attacked. Standing over four stories high, and configured with a deadly arsenal of advanced weaponry, the Combot is the ultimate weapon of war in the 23rd century. Each Combot has five parts: two legs, two arms, and a torso. When playing Metal Fatigue, you will be able to reconfigure your Combots to suit the impending battle scenario. For instance, a heavy attack Combot might consist of a rotary blade arm, plasma Cannon arm, a missile-launching torso, and armored legs. Once a body part is manufactured, it can be exchanged with other Combots or replaced with newly manufactured body parts. In addition, you can even amputate the limbs of your enemy Combots and reuse their parts against them.
​ 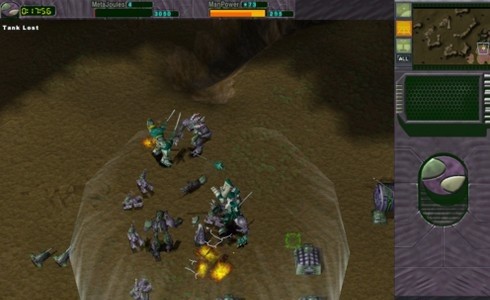