EditBy: Deep below the ocean an underwater civilization is fighting to survive the dual threat of deadly enemies and the impending destruction of their landscape. As a private in the Defence Force you take on dangerous missions to: Seek out and destroy your enemies. Perform reconnaissance into uncharted waters. Rescue damaged craft & installations. Orchestrate the repair and strategic defense of mining installations. Herd great schools of fish. Discover, explore and uncover the secrets of each land. Meanwhile Droids and drones, under your direction, scuttle around busily maintaining and repairing the slowly crumbling city. Your ultimate objective? The construction of a giant Mothership, that will transport your civilization safely away from these hostile waters. Deep Fighter combines elements of furious 3D dog-fighting, challenging exploration and puzzle solving in true 3D environments that provide an abundance of natural cover, obstacles and enemies. This playable demo of Deep Fighter contains the first four missions from the main game. These four missions are designed to introduce you gradually to the controls, the world and the characters of Deep Fighter. The full game gives you access to 6 subs, 6 environments and over 35 involving missions.
​ 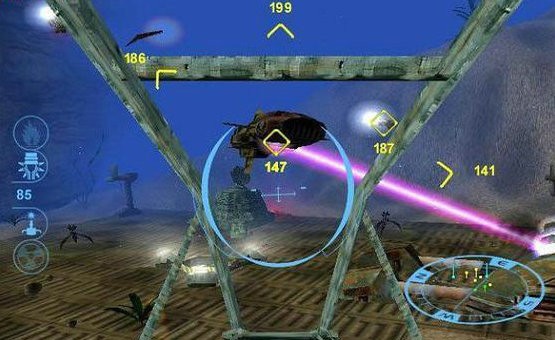