is an infernal manhunt that takes place in an all-pervasive 21st century cyberworld. Man against the machine ... Help Jack Kelkinn destroy the worst artificially intelligent computer ever made by the Untel corporation engineers. Fight through the incredible Untel Empire State Building in the Megatown city and destroy every dangerous vehicle controlled by the main CPU as you find your way, floor by floor, to disconnect it. If you don`t do it for humanity, at least do it for money.You`ll take command of the wildest assault vehicle without wheels, the Vyruz AM-030. Rockets, mines, grenades, laser, machine guns, flamethrowers, and missiles are just the beginning of the arsenal of weapons you`ll need. And you`ll need them all. Vyruz: Destruction of the Untel Empire features seven types of destroying weapons and eight unfair and aggressive enemies. There are four different atmospheres and several levels on multiple floors, which Create a large scale environment for incredible gameplay. Real 3D behavior including collisions, hiding, Inertia, rebounds, and more, coupled with high handling ability of your vehicle make Vyruz a great lesson in self-destruction.
​ 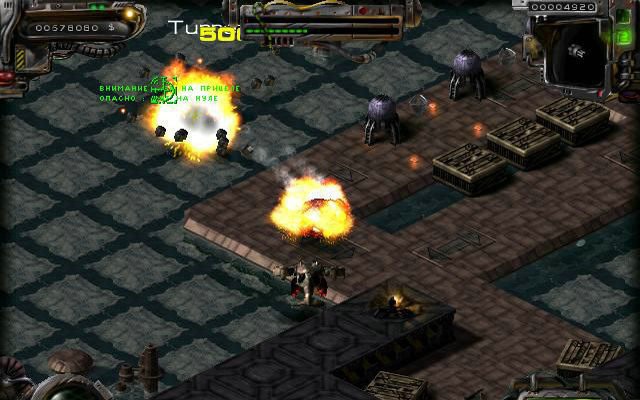