: The story goes something like this: The Creatures managed to seize the secret weapon of the evil Zargon, and plan to organize a rebellion despite slim chances to success. For worse, Zargon promised to kill anyone involved with a rebellion. So it`s Win or Die! Not an original one is it?Authors claim the existence of more than 25 units you can use to defeat Zargon.didn`t count`em, but sure there are lots of them. It`s a nice feature that you can use the units of the same type and load them with different weapons. In addition, you have units differing in their levels of quality, thus allowing for some basic, as well as advanced unit design; provided you have sufficient resources to equip your army with the available improved characteristics and special capabilities. It`s easy to determine the features of the troops to be created through a simple menu, (you can Create one unit at a time, or six units together). To enable your troops to function properly, you must supply them with the ammo you manufacture in your factories.
​ 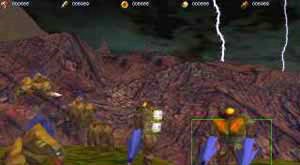