: You`ve been tracking your prey through the rolling Oregon hills, watching the wind, picking your spots, carefully avoiding open spaces -- no luck. Suddenly you hear a sound behind you! Turning around quickly, you`re startled by the approaching mass of a four-legged terror -- a Grizzly bear is charging! Not panicking, you take your time, aim the crossbow and squeeze the shot off. The arrow strikes the bear in the shoulder, not enough to slow him down. You die.That`s just one of many scenarios that awaits you in Opening Weekend: Bear Season by ManMachine. In this hunting simulation, you`ll be taken to four distinct regions where you`re apt to find polar, grizzly and black bears. Choose the immense hunting fields of Siberia in Russia, the rolling hills of Oregon, the thick forests of the Canadian back country or the stark reality of the Arctic region.
​ 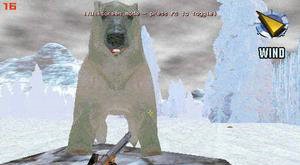