This 3D Shooter gives you the opportunity to choose among 3 races in the struggle for your life control. You can pick deadly Aliens, that has very piercing claws and striking tail, beside the double mouths that can pierce the enemy skull. You can also be a Predator, also an alien race that came here to hunt, and by that he uses Chameleon transparent cover, many vision modes, easy to locate anything that breaths or moves, with one gun mounted on his shoulder, and add-on knife-alike pack on his arm fist. He also uses other weapons, and can easily zoom any enemy even to 8x. Last race is Humans, to be specific, a Marine. Without weapons he`s fairly weak, but that`s why his weapon arsenal is huge, flamethrowers, miniguns, machineguns, bazookas, etc. and beside that he can watch in night-vision mode, or use his flares to enter the dark. However, flares are limited to five at the time. So pick a race and demonstrate your abilities, either as a human, alien or predator.This Gold Edition gives you more than 30 levels, including 5 bonus levels for each race. There are 16 multiplayer maps in this version, Millennium Add-on Pack, and Aliens Versus Predator: Prima`s Official Strategy Guide.
​ 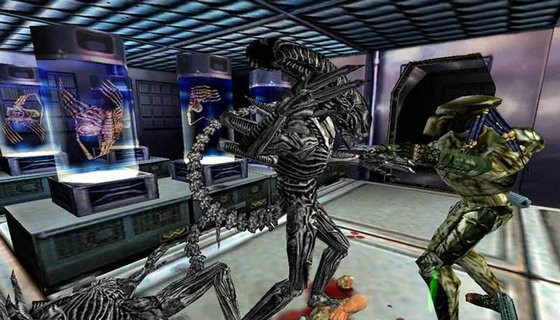