Eighteen all-new scenarios divided into three distinct historical eras are sure to delight today’s modern PC gamer. Thousands will travel across continents and across time with this exciting new expansion pack and surely, nothing could be finer. Ride the rails back in time!All aboard in WAR torn Europe. In the passage from 1939 through 1950, stop along the way to do your part for the war effort. Deliver troops and supplies to the besieged Allied front. Rebuild the British rail system after its destruction in the Blitz. Protect Mother Russia from the advancing Germans. Only a foolproof rail system can spell victory for the Allies! Modern times require progressive thinking!Next stop, the Modern Era. Solve the transportation problems facing the modern world from 1950 to 2005. Help build a modern Metra passenger system for Munich. Manage the suboceanic Chunnel system Between England and France without drowning in debt. Be the visionary who links two of America’s greatest cities, Los Angeles and San Francisco, with a long awaited high speed rail. Last stop, the future!From 2005 to 2030, worldwide flooding and melting ice caps wreak new havoc for the modern railroad tycoon. The United States is a watery wasteland. The Mediterranean is an empty basin with a blossoming Eden. Antarctica is a promising agricultural center. The heady task of providing rail systems for this strange and exotic new world falls upon your shoulders. No doubt, only the most ingenious solutions will do. One of the wonders of the world?
​ 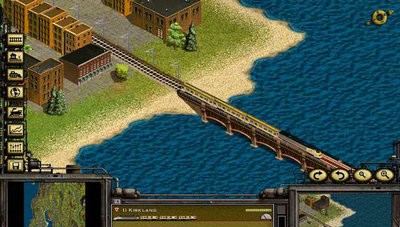