EditBy: MeggieSoft Games Piquet is a comprehensive implementation of the highly-regarded card game dating back to the 15th century. Play against an online opponent or against your computer. There are many customizable graphic, sound (including MIDI music and speech output), rule and scoring options. Six different computer opponents are available for when you are unable to get online, or just want to practice privately.Piquet is a game of exchanging cards, declaring combinations, and playing tricks with the object of scoring more points than your opponent. Each game, or "partie", comprises 6 rounds. Piquet is one of the oldest Card Games and is widely regarded to be the finest and most challenging card game ever devised for two players.Each round starts by the players exchanging some of their cards with fresh cards from the "talon" (the stock). The declaration phase follows during which the players attempt to out bid each other`s Point (long suit), Sequences (runs) and Sets (three or four of the same rank). The winner in each category scores points for the winning declaration and any additional sequences or sets, respectively. Finally the cards are played as tricks, with points awarded for leading and capturing tricks.The challenge of Piquet is to balance the exchange, the declarations and the trick winning in order to have the maximum advantage over the opponent. Special bonuses exist in both the declaration and trick phases for the artful player.The user interface, common to all MeggieSoft Games, supports both point-and-click and drag-and-drop mouse operations. Features include: realistic animated card movement; right-click pop-up menus; a hint facility; a tutorial; automatic play; automatic save and restore of partly finished games; multiple-user scoreboards; a clean and uncluttered main window; status-bar shortcut buttons; and fully customizable main display font and wallpaper effects for the table and playing mat, and the card backs.
​ 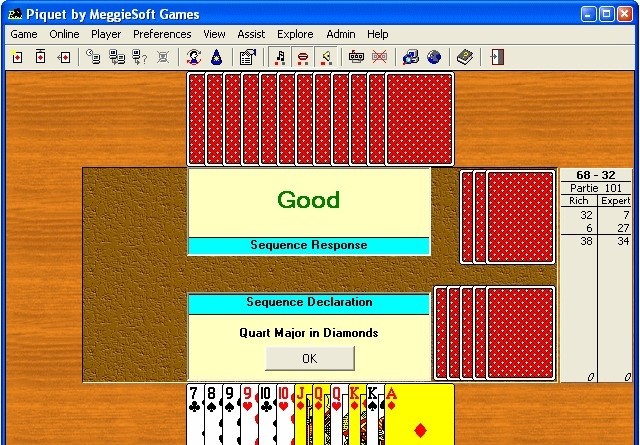