he concept of YourTris is probably something you`re seen before. "Oh no, not yet another one of those Tetris clones", you might think. Well, yes, it`s yet another game similar to the original Tetris, but hopefully the similarities Between YourTris and other Tetris clones will end there.The primary goal of YourTris is to be a Tetris like game which looks, sounds and behaves like you want it to do. If you`re one of those Tetris addicts you`re probably checked out tons of other Tetris games and found that either you didn`t like the sound, it was too small, too big or it simply just looked really ugly. With YourTris you will not have this problem, because you may customize both sound, look and behaviour.
​ 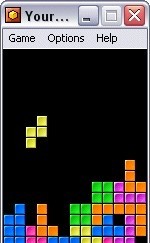