Editor: Hacker is a unique hacking simulation game. You enter the underground world and play the role of a hacker, working against a system that aims to control everything.A complete hacker console and interface will Create a perfect hacker environment, while the realism of the game elements will make you wonder if this is real ... or just a game. Hacker Replay - Unlimited contains 23 levels divided into five episodes. The game features a complex console based interface, which closely resembles modern operating systems and computers, but manages to keep the feeling of a hacker environment. This is not all: With complex modding capabilites, you can always go ahead and create new levels and missions, modify existing ones, or play those that were created by our enthusiast community.
​ 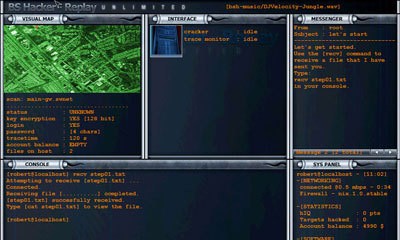