EditBy: Charge in, take aim, and take off! ThinkTanks is a tank combat game designed to be a blast for the new and experienced gamer alike with lighthearted, fast paced pandemonium. Either battling against brain-hungry BOTS in solo play or going head-to-head against others online, ThinkTanks has something for everyone.A riveting solo game, 4 different online game types, co-operative team play, 3 tank types, 12 different mission locations, fast-paced gameplay that`s easy to learn but hard to master.What people are saying:ThinkTanks Inducted into MacWorld Game Hall of FamePeter Cohen rounds up this years best of best for Mac players, "Once again, it`s time to roll out the red carpet at the Macworld Game Hall of Fame and honor the year`s best pulse-quickening, mind-tingling games."MacWorld Magazine (4 mice)"ThinkTanks retains what`s best about Combat and has new elements that bring the game up-to-date. It`s a steal at its price."The Mac Observer (Four and a Half Thumbs Up)"What a blast...This game`s a keeper."Daily Game (8 out of 10)"...the amount of pure fun you`ll have for $20 makes those $50 titles on the market seem about as deep as a mud Puddle."MacGamer (85% Rating)"Whether you`re looking for a budget game, a clever shooter, or an arcade treat, ThinkTanks will satisfy with its unique concept, simple game play, and slick Execution. But don`t take my word for it, download the demo today."Game Chronicles Magazine (7.8 out of 10)"...this is a fun and easy to learn tank game...People will be enamored with the zany animations and sounds and the overall fun of the online facets of the game."
​ 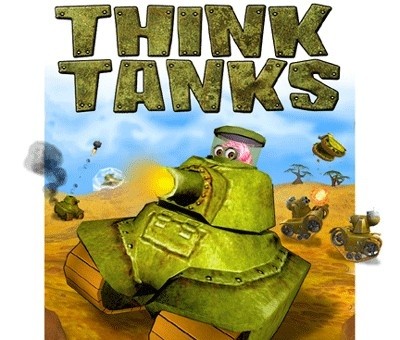