Become a space tank commander and experience the thrill of Star Wars combat unfolding on the outskirts of the Galaxy. Hundreds of enemy Battleships have blacked out the stars under your head, attacking you as one synchronized killing machine. Maneuver your tank along the frontline to escape from the Barrage of laser fire and shoot menacing enemies down to save the Empire. You will battle your way through a multitude of combats in five spectacular space worlds, all displayed in 3D and with lots of realistic effects. Victory won`t come easy as the enemy has over 12 types of battleships with deadly arsenals piloted by Star Wars veterans.Your weapon is a front robotic tank that has been used for years to protect the far borders of the Empire from the outer space aggression. Your tank can move along the frontline and has a vertical hydraulic aiming system on board. In case of severe damage, the tank is serviced by repair Droids that can restore its operability. To get a repair droid, you have to gain a certain amount of points from 10000 points in the first world to 30000 in the fifth world. As you fight your way to the victory, remember to collect bonuses, including armor restoration, power modules of the mega gun system, mega armor system, etc. They will increase your Survival chances. The frenzied pace of combat is accompanied by electrifying music and sound effects.
​ 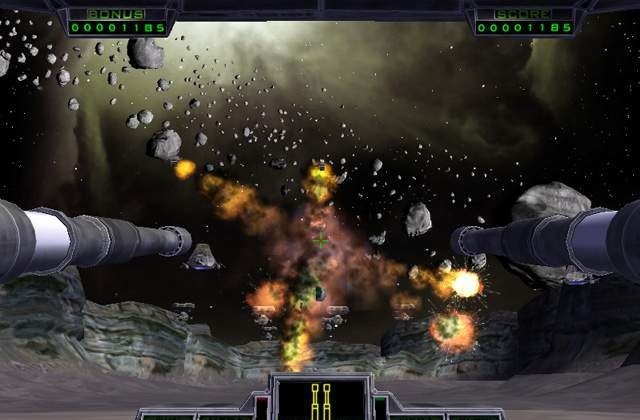