Great Uncle Worm is a Snake Game with a unique twist (no pun intended). Based on the TI-83 game (not by Doc Entertainment), Great Uncle Worm has players moving around the field in a circular motion instead of just 90 degree angles in traditional snake games. Great Uncle Worm offers many different levels of customization. Players can choose from the difficulty, speed, control type and starting size of the arena. While it may be tempting to turn on the easier settings, players are rewarded with a bonus multiplier for the harder that the game is set on, which will boost their final score by that multiplier. The game features a `Standard` mode in which players need to consume 10 apples before moving on to the next level. Each time that they advance a level in this mode, the level size gets smaller. In `Endless` Mode, the player goes on the same level for as long as he or she can survive. The fast paced `Shrinking Arena` Mode shrinks continuously until a player advances a level by eating 10 apples. `The Diet of Worms` is contrary to other modes in that your worm actually gets smaller as time goes on. If the worm contracts to nothing than you lose. `Dagger Drop` has the player once again eating apples but this time must avoid falling daggers that increase the worm`s size. `Survival` mode has the player attempting to survive for as long as possible controlling a worm that never stops growing.
​ 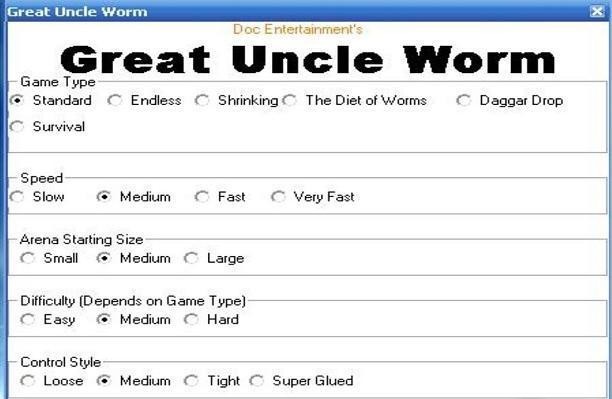