`AG::Three Windmills - Animated Tetris` is a new game from Animated Game Series by Elefun Multimedia. This new series is a suite of animated nature landscapes, at the background of which runs Tetris - the most popular game in the world, known to each user. This `Animated Tetris Edition` will surprise you with interactive gameplay and original frame movement. One of such nature landscapes is `Three windmills`. Its background will recall the feelings you experienced in past playing Tetris, and will give you more unforgettable impressions. The Tetris itself became more interesting: many new features and peculiarities were added. Almost 20 years have passed since the creation of Tetris. In the initial version of the game there were figures consisting of four blocks only. The figures were falling down in the closed area under the gravity force. The player could turn the figures in different directions, in order to put the figures together so that there were no empty spaces in the rows and columns. Tetris at the background of animated `Mystery Forest` landscape has more playing capabilities and add-ons. Tetris at the background of the animated landscape is a game field, which can seem unstable to you, but this is not exactly so. It is just moving from side to side, in time with slight rocking of lake water of the animated `Mystery Forest` landscape. Before starting playing you can choose the difficulty of the game, as well as one of the two versions of the game. The moment the first figure appears in the game field and swoops down, a strange sensation of something unreal embraces you. Two fireflies are fluttering along the edges of the game field. The moment you put together the whole row or several rows, the fireflies rush into the game field and whole rows disappear in blazing enchanting flashes. From the moment of getting first points and after short period of game time, two scales are starting growing up.
​ 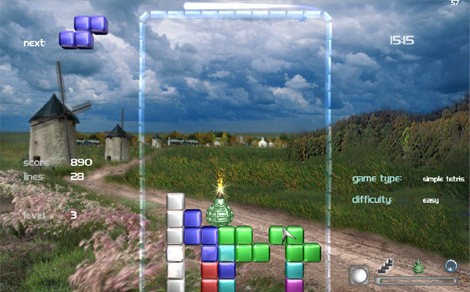