Feudal lords are vying for power. While the noble fight for a Just Cause, others seek to usurp the birthright of another and have the crown for their own. ... From their Castles, lords prepare for battle by shoring up defenses, expanding the economy, and raising revenues. Soldiers are trained while navies and siege engines are built. As armies cross the woods and green fields to lay siege to enemy castles, `No Quarter` is the cry heard from the highlands to the village Londinium. ... Volume One of the magnificent Middle Ages Trilogy, Medieval Britain places you in command in an age of elegance, chivalry, rivalry, and chaos. Return to this defining moment in history, take the future into your hands, and rescue Medieval Britain as it slides toward a new dark age. ... Experience eleventh century Britain in this real-time tactical adventure for one to eight players.
​ 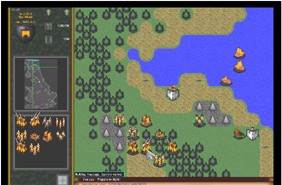