Put your mind and reflexes to test in the ultimate game of brick busting. The graphics are a dynamic mesh of particle effects and object morphing to keep you mesmerized. The gameplay is enhanced by new power items and bonuses to keep you thinking. Enjoy enhanced gameplay with XP Mode and customize the game to your own personal liking with many options.The goal is simple. Destroy all of the bricks in each level to proceed to the next level. Acky`s XP Breakout is quite different than most games in The Ball and paddle genre, instead of having a set number of balls, you have two resources which are needed to Create a ball, and this resource is called ether. Ether comes in two colors red and blue, both of which are needed to form a ball. While playing you will see each kind of ether drop and if you catch it with your space pad your ether tanks will fill up, allowing you to create more balls.The game also features several bonuses for doing different things. Gaining bonuses is optional but you are encouraged to do so because they are needed to unlock XP mode, a special mode where you get super powers. After you complete a level you get a bronze, silver, or gold Trophy. There is also a ranking system which is based on how many trophies you have collected and how many bonuses you have obtained. While you play statistics are saved for each level which can be logged online so you can see your performance as compared to other players.FeaturesSuperior gameplay and exact control 150 powerful levels Awesome particle effects 80 different brick types Free level expansion packs 26 unique power items Four difficulty settings 16 bonuses Built in level editor Online stats tracking board Trophy and ranking systems Enhanced play with XP Mode Special gemstone and Blaster items Effects and object morphing
​ 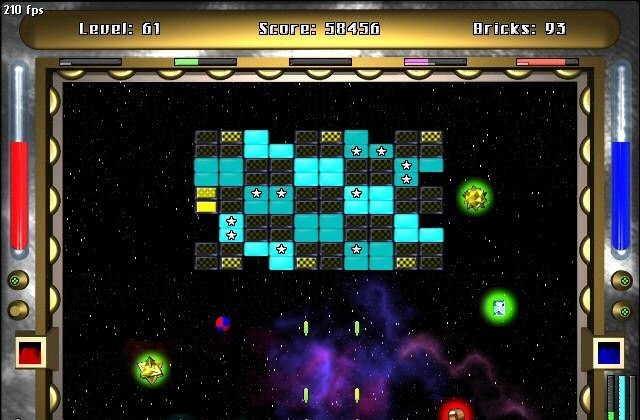