The Restaurant Game is a research project at the MIT Media Lab that will algorithmically combine the gameplay experiences of thousands of players to Create a new game. In a few months, we will apply machine learning algorithms to data collected through the multiplayer Restaurant Game, and produce a new single-player game that we will enter into the Independent Games Festival. Everyone who plays The Restaurant Game will be credited as a Game Designer. It`s never been easier to earn Game Designer credentials!All contributions are not equal, however. Designers will be ranked based on how well they play their assigned roles, and accomplish their objectives. There will be only one Lead Designer. Remaining credits will be divided into Game Designers and Assistant Game Designers, and within each category individuals will be ranked according to the quality of their performance(s). Quality will be determined computationally, based on a number of factors.The Restaurant Game takes about 10 minutes to play. It is a two-player game that will automatically find partners for players once you join a server. You are encouraged to play multiple times. In order for this project to be at all successful, we will need to collect a lot of data -- data from over 10,000 gameplay sessions. Play early, play often, and please spread the word! This project attempts to address two frustrations I experienced as a professional game developer. 1) Convincing human social behavior is difficult to model with existing hand crafted AI systems. 2) Play testing by people outside of the development team typically comes too late to have a major impact on the final product. This experiment aims to generate AI behaviors that conform to the way players actually choose to interact with other characters and the environment; behaviors that are convincingly human because they capture the nuances of real human behavior and language.
​ 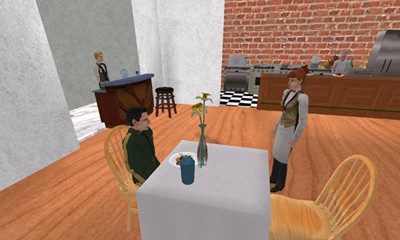