Hostile Space is a very different MMORPG from many currently on the market. A 2d game based in a persistent galaxy in the far reaches of space, it is difficult to compare it to other games. Players can go solo, or group with others to defeat harder enemies. Although not an integral part of the game, PVP is always fun, and an interesting part of the game. To defeat the more challenging enemies in the game, many players of different classes may group together and work as a team. There are six classes and six races, each having their own benefits and drawbacks. The classes include gi pok, which gives you more hull, tekorus, which raises your hull regeneration rate, human, which increased your psi regeneration rate, eschar, which increases your power regeneration rate, terrix, which increases your offense, and kalarix, which increases your defense. As any one of these races, you can choose one of six classes. Engineers are the space medics, they repair themselves and other ships quickly, either in battle or out. Mercenaries are the "tanks". They have the most defence and have the ability to provoke enemies into attacking them. Smugglers use cloaking devices and ambush their enemies when they least expect it. There are also three psi classes, including the Telepath, whose main strength is their Psi Entity, which they summon. There is also the Telekinetic, who`s ability to cast psions that increase hull, as well as being able to summon a Psi entity, make them a difficult foe. Lastly there is the Pyrokinetic, who does as much, if not more damage then the Smuggler, but can not take damage themselves very well. When used in battle together, these classes all work together to take on anything that they can encounter. Many players join clans to help them along in the game. Clans usually group, level, and boss together, as well as pvp other clans when attacking or defending their clan bases. For more difficult things, many clans may work together to accomplish a common goal.
​ 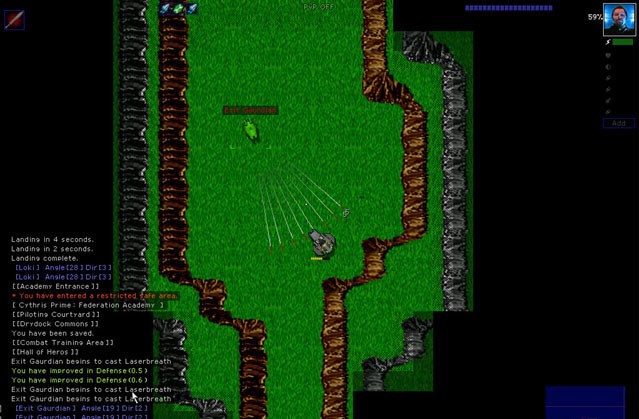