Boom is a game for two players (or one schizophrenic player) in which each player tries to hit his/her opponent with such dangerous exploding objects as sandwiches, dead rats, bananas, bones or honeycombs depending on whether he/she is a human, vulture, gorilla, dog or bear. The players take turns in throwing their appetizing bombs at each other by specifying the angle and velocity of the projectile.This must be done taking into consideration the obstructions in the way which include buildings, cacti, tree trunks, chimneys & antennas and hills. Other considerations are gravity and the wind speed (which is provided in the weather report at the beginning of each match). The player who manages to hit his/her opponent is awarded some points; negative points are given if the player hits himself/herself. The winner is declared at the end of a series of matches. The original idea for this game came from the QBasic Gorillas program.
​ 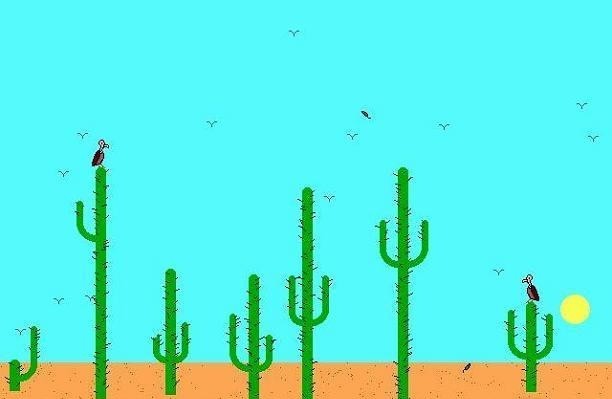