Fatal Fury 2 was the second game in SNK`s 100-Mega Shock series, offering improved graphics and gameplay over the original Fatal Fury. The play controls were modified, this time making full use of the Neo-Geo`s four button configuration, by including four attack buttons (two Punch buttons and two Kick buttons). The game expands on the two-lane plane system by giving the player the ability to knock their opponent to the other lane. Additionally some stages have hazards like electrified wires or a stampede of bulls. In addition, each character now have a "desperation attack" which can only be performed when their life meter is low and flashing red. These were implemented to help turn the tide of a fight, although many are challenging to use effectively.
​ 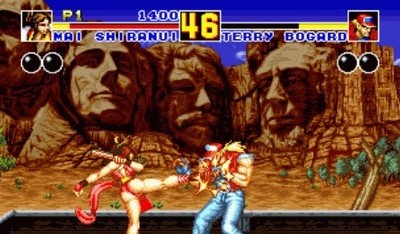