At the beginning of each session, players choose whether to go through the game in one of two modes, "Lonely Wolf" or "Team Battle". In "Lonely Wolf", you control one character throughout the game, while "Team Battle" lets you pick a band of three Soldiers through their missions, switching Between them on-the-fly. Choosing to go it alone gives you a higher starting life total, while proceeding as a team will give you a wider variety of special weapons as well as a higher starting total (ten for each of your three characters instead of twenty for one).Each character has their own virtues over other selections. Some might start with higher life totals, while other could move FASTER. Regardless of your choice, the soldiers each possess a unique special weapon or "bomb", which vary in distance and range.Controls consist of an 8-way joystick and four buttons. Players move in eight directions with the joystick and fire, Dodge, use their special weapon, and switch characters with the A, B, C, and D buttons, respectively.Players must progress through 6 stages, fighting against other soldiers, bosses, and finally, Commander. Your weapons can be fired in all 8 directions, but you can also strafe by holding down the fire button. Attacking within close range of an enemy will yield items, including point bonuses, weapon power-ups, and life. Enemy fire can be avoided with the dodge button. In "Team Battle" mode, you can cycle through your three selected soldiers, allowing you to utilize the traits and special weapons of each.
​ 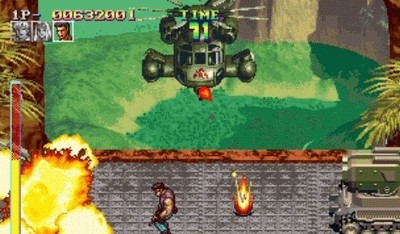 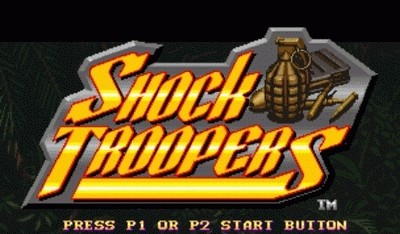