Editor: Tom`s Schafkopf/Sheepshead Express contain our new 3D user interface. You will find yourself sitting at the table with 3 opponents. If you choose, both of whom are fully animated. For example, you`ll see them deal and play out their cards during the game.Sheepshead (Schafkopf) is a popular family and community card game. Although the basics can be learned quickly, it has a number of subtleties which give it the ability to hold the interest of players over a long period of time.The rich history of this game has produced a number of local variations, but the basic outlines have been standardized by the German Schafkopf Association. These and the US-rules from the National Sheepshead Association form the basis of this program which implements a four-player version of the game.* The computer simulates three players each with selectable playing styles. Sound, personal game statistics, and assorted card types add variety. Comprehensive explanations of the rules, playing strategy suggestions, and a training mode are available for beginners.The program simulates 3 players each of whom can be given one of four playing styles. Sounds include 6 voices (3 male and 3 female). Play ratings, assorted card faces, contextual help and rules for beginners are a standard part of the program. Variations include practice mode, bock rounds, and twelve different solo types.This software also supports the following language version:english and german.
​ 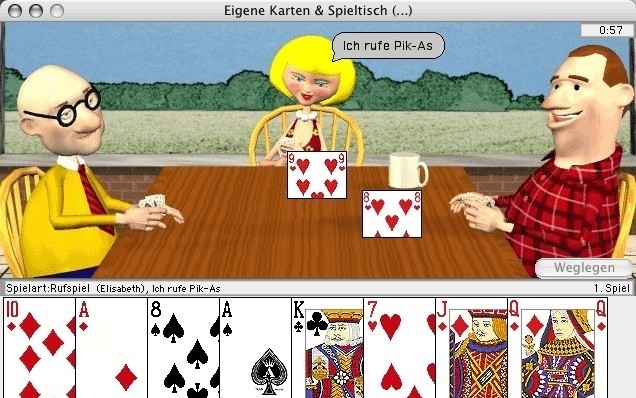